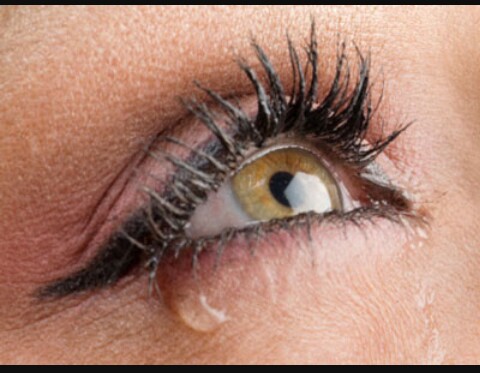 I shook from head to toes.

Jesus, what would I do? I will kill myself
He has multiple baby mamas?

Ah! I will kill him, then precious Blossy,  then myself.
“Liz, easy! Take it easy” The Holy Spirit started speaking again.
I reversed and sat on the bed. My two legs couldn’t bear the shock anymore. They started hitting each other.

I started having a mild chest pressure. I could feel air struggling to pass through my bronchi.

Another attack is looming! But abeg, let asthma stay aside.
As I let out a very dry cough and started wheezing, Dave rushed to me, tears still on his face.
“Liz, I am sorry. Should I get you your inhaler?” He asked me.

I saw concern on his face but my health isn’t the most important now. it’s the issue on ground.
“Tell me what you have to say to me then I will decide either to die or live” I wheezed on and on.

Dave made an attempt to hold me round the shoulders but I refused the offer.
My chest was on fire. It was burning so fiercely.
“Since, its death you want me to die, I’ll say yes! I will die but before I go, tell me what you have to tell me” I forced the words out of my mouth.
It wasn’t convenient sitting down any longer, so I knelt with my chest on the bed if that would ease my pains.
It intensified.
“Lizzy, I can’t tell you anything at this point. Please” He was saying with great concern on his face.

I threw him a dangerous look with my mouth  suspended as I struggled for air
“Then, there would be problem. Tell me now or there would be problem in this house” I threatened
“Ok then. Liz, please be well first. At least, use your inhaler first. I know how you feel.” He was saying but his preaching didn’t go well with me as I struggled to shift from the bed, caught him by his two legs and onto the bed he fell. He was somewhat shocked at my sudden power. I pulled him down the bed and held him by the neck. He looked at me with great fear.
“Will you talk now?” I wheezed on.

He nodded like an agama lizard.
I loosened my grip on his neck and he prostrated face down before me.
“My wife! My lovely wife! I know my God will keep you for me but please don’t die! Please don’t die my dear. I can’t imagine living in this world without you. Please” He cried on and on
“Ohhhh! Dave, come on, talk!” I gave out the command as if my time on earth is already measured and almost up.
“I didn’t have an affair outside our marriage nor do I have any child out of wedlock. You are the first woman I would meet and Blossom is the first and only child I have” he said and I tried to be calm but my wheezing didn’t agree with me. I heaved a sigh of relief though.
“So, can I get you your inhaler?” He asked, still very concerned about me.

I nodded in the affirmative and he brought it to me. He signaled for me to open my mouth and I obeyed.

As he delivered the dose into my airways while holding my nose, a tear ran down my face. He saw it, looked into my face, cleaned it and hugged me tightly as if his life depended on it.
I needed the hug badly. It really helped me to calm down. I wheezed on and on till it totally subsided. With my head still on his chest, I let out a deep breath.
“I am okay now” I said as I cleared my throat
He withdrew and stood up from his sitting position. He helped me to sit down on the bed. Then, he took few steps backwards and sat in the armchair.
“Lizzy! Whatever I say here today requires your anger, your tears, your disappointment but please whatever I have done does not worth your tears. You are too precious for those” he said, tears welling up in his eyes.
I was too weak to say anything so I just nodded as tears welled up in my eyes too.
“It all started in the third trimester of your pregnancy. You were not too strong and all and my mother came to take you to her place for 3 weeks. I really missed you and I was always coming over to check on you.” He shook his head, bowed his head and breathed out so loudly.
I could only watch on.
“Those 3 weeks were like numerous years to me. But before then, all sexual activities between us had come to an end. You were in a pitiable condition. Eventually, three weeks to giving birth, you were admitted in the hospital and I was also busy with the end of the year reports in the office. Mum went for checkup in America and your mum was in France with her ailing mother. They had to employ Dorcas, you cousin to come over here to provide food for you and I”
He stopped and covered his face with his hands. He sniffed wetly and continued.

My heart started racing as if a thousand soldiers were in pursuit of it.
“It had always been like that until a particular day, three days before Blossom was born. I was in the Hospital parking lot. My head was on the steering. I was not too happy about the medical report that the baby was still breech.” He said again while I watched on. I was scared than ever before.
What then happened?
“Just then, a hand touched my shoulder. I was scared but I looked up anyway. It was Dorcas. She smiled and I smiled too, as per, my wife’s cousin showing me care. Then her hand travelled to my chest and she asked subtly, almost seductively ‘How have you been coping?’ I looked up at her and saw the dangerous look on her face. I was scared and threw her hand away” Dave stood up and moved to the window side, his arms akimbo. I followed every of his gestures and movements.
“Then, she looked straight as if she was hurt. ‘I was only trying to be nice’ she said and I looked at her with concern that what does a fifteen year old girl knows? She started crying that I misunderstood her. I stretched out my hand to pat her back when she came close and placed her head on my chest…” he continued and I just couldn’t believe my ears.

My heart started pumping as I brought the story to life in my imagination.
“Then she asked me so seductively ‘don’t you want me as much as I do?’ that was when I knew that it was a dangerous trap. I pushed her off me, opened the door of my car, closed the door and then leaned against the car. It was a real temptation but I didn’t know what to do. I put her in a taxi and I drove home locking the door of my room. I couldn’t believe what happened to me” he said again.
The realization dawned on me. My husband was seduced by my cousin while I was away!

I started feeling the pangs of attack in my chest again. It tightened the more but I fought it.
I gat to listen to this story to the end!
“Liz, when I got to the room, I knelt down to pray against it all but the thought started coming to my head. I couldn’t resist it. I prayed and cried to God but my dear, I was weak. That night, she sent me one of her nude pictures and that was how everything started. I sent her a text message that she should not allow God’s wrath upon her for sending that kind of picture but instead of deleting it, I started mesmerizing myself with it. Every day, she sent more and more and though I never allowed her close to me, I anticipated more of the nude pictures every day.” He sat down again and supported his chins with his palms as tears rolled down his face.

My wheezing had started but I tried to suppress it so the story teller wont end his account.
“Dear, I was forced to barge in on her one day while she was bathing. She was very happy to see me and she signaled for me to come closer. I ran out of her bathroom but the picture remained in my head for a long time”
“Jesus!” I cried out with pain.

Myself for getting sick, God for making me pregnant with serious discomfort, Cousin Dorcas that seduced my husband, or Dave that was only responding to human urge since his wife was not available.
Who should I get angry at? I cried and cried.
Dorcas!
Devilish Dorcas!!
Demonic Devilish Dorcas!!!
I fell into the bad and cried very hard.
“God, why couldn’t you keep my husband for me?” I asked on and on.

I was embittered and very angry.

As I pulled at the pillow angrily, the stress was too much for my little heart.

I wheezed harder and phew! I passed out!!

I was flushed down through a pipeline or sort. I saw thick darkness as if i could touch it.

Thanks for your patience!