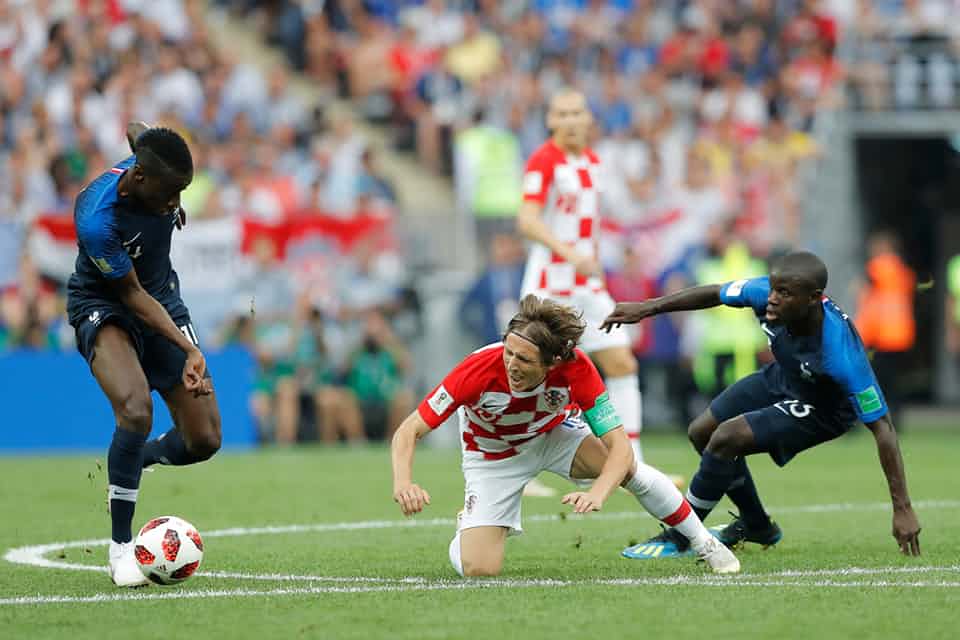 Today, I want to talk about the game between Croatia and France which went down yesterday, 15th July, 2018.

Yes, I am so sure that you know how much I do not support the Croates’ team. Haha… If you do not know, I really have a huge dislike for overhyped entities.

Plus the fact that they defeated Nigeria and Messi! It’s not envy or anything like it, if they had won, their pride would have grown wings. C’mon look at their faces after the glorious victory of France! Hahahaha

Alright, so I have some of my friends telling me about how France had better chances because there are stars in the team. I was like “No way!” If I hadn’t seen the team nor followed the game, I would have agreed but I did see the game- the overconfidence and the desperation of the Croats.

One of the games I will never forget was the Croatia against England. Oh my, the people from the Queen’s land kept playing fairly while their European sister kept pushing and pulling them down, the referee turning a blind eye to the various fouls.

Which of the teams had the better chances of winning the football? Some people told me France because they have stars. I was like ‘What stars?!”

Are those ones stars compared to the many stars in the Croatia team?

Let’s break it down here.

Which of the two teams had the most stars? That’s what I want to unravel here today and I will draw out some lessons as well. I will be drawing out five best players from the team with their caps and ages according to Wikipedia.

Griezmann is 27years and has 61 caps

And last but never the least, 25 years old Pogba only has 60caps to his name.

Now to the so called starless Croats.

So talking of who has the best experience, Croatia tops the table. Let’s try to do the maths.

I mean, just the five top capped players, oh my God! What a huge difference!

I returned and saw under the sun that the race is not to the swift nor the battle to the strong!

David knew the Strength of Golaith were his weapons like France knew the strength of Croatia was their defence!

What did they do afterwards?

After the wide margin created by France, they all shifted away from the defence of Croatia and formed a stronghold in front of their own house! Hahaha

Oh little wonder they worked a bit and ate much! They knew their onions so well!

That must be why possessions and shots and other stats were in the favor of Croatia while the cup belongs to my African France!

Haha…yes African! Look at the number of blacks in the match. Mbappe and Pogba and many other players have African heritage. Another reason why I supported the team!

I do not write without cogent lessons to draw out so what are the lessons from this write up?

1.Pride goes before a fall and a haughty spirit before destruction.

I read several news stories of how Modric especially said they were the better team. Oh really! Only because you eradicated Argentina, you got puffed up?

Let others praise you. Don’t sing your own praises!

2. God uses the foolishness of this world to confound the wise!

Who is France? If Argentina, Portugal, Spain, Uruguay can be swept out of the World Cup, we can finish you.

Suddenly, the table turned and the Croats were confounded.

3. Goliaths don’t always win! Favour turns in the favor of the less supported team attimes. Even look at our God, when He sees that someone is being looked down upon too much, He lifts such up.

He gave Leah children and locked up Rachel’s womb.

4. It’s not by works alone but by Grace.

5. Know the enemies you are fighting and their strength. Fight that in the Power of the Lord!

6. Block the entrance to your house from the enemies’ attacks. Form a stronghold against your spirit so none of the fiery darts of the enemies can shoot in.

Oh yes, people might have looked down on a small country of Croatia and really its a feat to get to the finals but it would be wrong to say they didn’t have much experienced players than the Led Bleus did.

Only that, favour was on the side of my young France players. In fact, a rain of celebration heralded the whole show after the game.

Mbappe made a history of being the youngest player after Pele to score at the world cup.

Pogba too made a history of being the first Man United player to score at the World Cup.

Wondering why I know football this much? Hahaha

I am a journalist. A journalist knows a bit of everything.

Also, I only know just a little. Haha…I am an ardent follower of anything Nigerian and invariably the Super Eagles!

Croatia crushed my Super Eagles and I had watched out for the day and way they would be crushed too. I am happy the blacks crushed them to powder.

Thanks to God you know that!

Yorubas will say ‘Oluwa gbe ogo fun ole mi” meaning “…the Lord has crowned my nothing with glory!” Halleluyah.

You know Nigerians will create prayers from any situation, hehe, here are my prayers for you:

My prayer for you is that where men have looked down on you, the Lord will reach out to you and pull you up.

Every enemies and tongues that have boasted against you shall come back to watch your jubilation with their jaws suspended in the Name of Jesus.

P.S: I know some guys will say I’m being bias. Hahaha…no problem, you just support your Croatia and  leave me to support my France. Nagode. Hehe

Also, if France had beaten Nigeria and Messi, I would have supported Croatia… Hahahaha