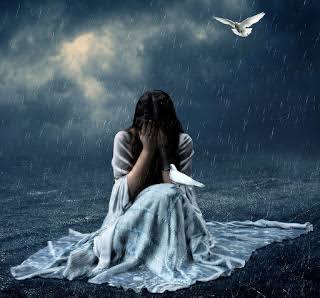 It was raining so profusely…

As the wipers of my car wiped the heavenly tears of rain off my car, I switched on the heater of my car and hummed ‘Amazing Grace’ so happily as my already cold-infested body came back to life gradually.

Though the road through the wilderness that I was driving through was rough, I kept on driving confidently.

I didn’t even know where I was going to…

Just then, I saw some images afar off and I slowed down to get a closer view.

When I couldn’t get a proper view, I drove closer and peeped through the window.

Who am I seeing?

Mrs. Idile, my pastor’s wife was seated on a gossip chair on the road fully drenched in rain. She was shaking so vehemently as her teeth gnashed against themselves.

I drove closer to her side but as I opened the door , the breeze from the windy rain was too much that I had to close it back hurriedly.

How do I approach her?

Why was she in the rain being beaten that way?

Where is her car?

What about her caring husband?

Taking another look at her, I knew that I had to do something if I didn’t want to lose her.

A puddle of water was already forming round her and if care wasn’t taken, she would be swept away completely.

I looked behind me, pulled my rain coat from the back seat and put it on. I turned the ignition key and opened the door. Cold breeze rushed inside but I had to do this.

As I jammed the car door, Mrs. Idile looked up at me. She was shivering severely. I noticed that her tummy was protruding and I was shocked.

Oh that affectionate smile capable of calming a raging storm no matter how big in one’s heart!

But that smile…just like the one I saw on Sunday…her lips were blue!

I ran towards her.

“Mummy!” I screamed, very scared. I held her hand and they were like ice.

“Sister Precious” she called out in a husky voice, still smiling.

“Mummy, what is happening to you?Exactly what?” I asked, really concerned

“It is well my sister” she said, stretching her very wrinkled hands to pat my back.

I withdrew from her touch

When did her hands become this wrinkled?

“Mummy, where is daddy? Why are you alone?” I asked again, a weird sensation running down my spine.

She smiled as tears rushed down her eyes.

Though it was raining, I still could distinguish her teary face as her face had gone red. She pointed at her left side and I looked beside her.

He was in a very small glassy shed that looking comfortable, mere looking at it.

He was helping some men and women to get into the same shed. He was smiling, hugging and praying for them and they were all happy together.

“What! Mummy, go inside” I shouted out of frustration. She smiled and shook her head in the negative. She pointed to the shed and I went closer to it. The inscription on the shed almost made me mad!

What is full when I could still see empty seats inside.

“Daddy!” I called out, very sharply. I was enraged. The pastor looked at me, very happily and opened the glassy door for me.

“Come in my sister” he said but I shook my head.

“I brought my car sir. But mummy is outside. Can’t she come inside?” I asked and he peeped outside

“Which mummy?” he asked and I shook my head, greatly disappointed

“Your wife sir” he said and he smiled.

“Mummy would be fine. We have to tend to the sheep first. If you notice, no family member is in here. That was why I sent all the children abroad so that mummy can have time for herself. I must work the work of him that sent me while it is day, the night cometh when no man can work” he said and closed the door with a great thud.

I looked behind me to look at her side and I was shocked- she had fallen to her back!

I ran closer to where she was and lifeless as she looked, I saw blood streaming down her legs- she was bleeding!

“Jesus, have mercy!” I screamed loudly.

I was so confused as to what to do. I didn’t have any knowledge of medicine, and I couldn’t even think straight.

“What to do Lord? What to do?” I cried as the rain fell harder.

I heard the sound of an approaching car and looked back.

It was my car!

Who was driving it?

Why are these weird things happening today?

I was holding my car keys few minutes ago. Where is the bunch of keys now?

The car door opened and a guy jumped out- Tony!

He smiled as he looked at me and immediately wore a frown as he saw Mrs. Idile.

I was shocked as I watched on.

I checked the cloth he was putting on- exactly the same Ankara print as mine. He was looking really good and the rainfall was good on him- he looked cute!

“MMR, leave way” He said as he pushed me aside gently. He smiled and gave me a big umbrella. I unfolded it and it was big enough to cover the three of us.

MMR? What was that?

As he held Mrs. Idile and felt her temperature, I came back to life and concentrated on the dying minister of God.

He felt her pulse with his stethoscope and he looked at me, shaking his head. Tears rolled down his face.

“What?” I screamed, throwing the umbrella away. I pulled at his shirt and he just shook his head on and on, looking downwards.

“We lost her” he dropped the bomb and I almost ran mad.

“Lost who?” I asked and he nodded again. I screamed as I held on to her, crying profusely.

“Why console him? He killed her! The pastor killed her!” I screamed with all my strength as if my life depended on how loud my voice was.

But nobody seemed to hear me…

I looked at Tony who only pulled me up and assisted me into the car. He laid me at the back seat while he entered the driver’s seat. As he turned the ignition key, the heater resumed work, blowing with a very calming alacrity.

>>>>>>>>
“Mummy pastor, she can’t be dead. Mummy pastor!” I screamed on and someone tapped my shoulder

“Sister Precious” I heard my name clearly and my eyes opened widely. It was Sister Jane.

So, it’s been a dream all these while?…Like seriously?

I sat up and saw tears on Jane’s face.

“Is it true?” I screamed. Smiling faintly, Jane nodded over and over again.

“Mummy Pastor! Mummy Pastor oooo” I started screaming as I sat up from the pew in which I had slept off and started running to the back of the church as if being pursued. Jane called me back to no avail

“Mummy Pastor ooo….somebody help” I screamed on and on until I looked to my left as I approached the exit door and I heard my name.

I turned to look around and there they were all gathered the women leaders with Mrs. Idile smiling wholeheartedly at me.

“Is anything the matter my daughter?” she asked, smiling again- her very real, affectionate smile

“Is this for real? Is this a dream too? Is that mummy pastor? Somebody talk to me.” I cried again as I walked to her side on the podium.

Some women tried to stop me but she signaled at them to leave me alone.

I went beside her, knelt down, felt her legs, touched her calves and hugged her.

She hugged me too!

“Mummy is alive!” I shouted childishly and the women murmured

“Daughter, go and check yourself in the bathroom. Your cloth is stained at the back” she whispered into my ears and a cold wind of embarrassment ran through my spine.

I managed to smile at her.

She signaled that I bend down and she dipped her hand into her bag to give me a white shawl. I wrapped it round myself and passed through the back door outside with the women’s eyes following me- I most assuredly guess!

Sister Jane was outside and I frowned at her.

“Why were you crying earlier on? And I still asked if it was a true and you nodded. You made me to make a fool out of myself today and it’s not fair!” I retorted

“I didn’t understand your question Sister Precious. I was only shedding tears of joy because I am happy for you. You obviously just had a vision. That’s something we had both been praying for you for a very long time now. You asked if it was true and I thought you were referring to the vision thing. I smiled happily and told you yes!” she explained and I hugged her

He spoke to me in a vision.

But what does that mean?

Mummy Pastor was smiling just so happily now that I saw her.

I am still as single as ever, so why was Tony in the same attire with me?

What was I doing in a wilderness?

Despite the rough road, my car was able to still drive on as if on a tarmac! What does that mean?

What is the problem between the pastor and his wife?

Tony called me MMR…what’s the meaning?

>>>>
As I brought out my skirt from the spinner of the washing machine, I heard some rapid footsteps at the staircase and I listened.

The pastor was making a call.

“It’s a great privilege to do so for my wife my dear pastor. I am just going to dedicate this week to her. It’s her birthday and she has to be treated extra-wonderfully. Thanks for booking the hotel for us…we should arrive Dubai in the evening tomorrow. Let me tell her the surprise now…. My wife so loves surprises….hahahahahahaha… God bless you sir!…” he said on and on and I smiled happily.

I trust my pastor!

That dream was just a useless one jhur!

I had much to think about before I slept off.

My pastor and his wife are just too anointed to have any problematic issue between them.

I waved the dream off as I quickly wore my skirt, checking out myself in the mirror.

“Sister Precious, do you wanna sleep in the laundry?” Sister Jane called out and I smiled happily as I tip-toed to the door.

“I am coming right away mon amie” I said in a very musical voice- what happens whenever I am satisfied with something or extremely happy.